Big Ears (Knoxville, Tennessee, United States)
Big Ears is a music and art festival held at various venues around historic downtown Knoxville, Tennessee, USA.Named for someone who is capable of discerning and perceptive listening, who has the ability to use the ears as a creative tool or who hears things many may miss, the Big Ears Festival is a
2019  |  2018  |  2017  |  2022
keywords:   alcohol   alternative   art   band   booths   brass   classical   electronic   exhibitors   food   group   guitarist   indie   jazz   musician   other   percussion   pianist   rock   singer   solo   strings   woodwind   workshops

Loff Jazz Festival (Montreal, Quebec, Canada)
This annual jazz festival has become part of the culture of Montreal, Canada. Held at different venues around the city, this event is put on by a group of musicians and their partners. Words from the Festival It was in the winter of 1999 that the idea first t
2018  |  2020
keywords:   alcohol   booths   food   jazz   musician   singer

Blue Note at Sea (Fort Lauderdale, Florida, United States)
Blue Note at Sea is a jazz music festival on the water. Cruising on Celebrity Infinity, you will set sail out of Fort Lauderdale. Music, comedy, sun and fun. This is a 18+ event (18-20) must be accompanied by an adult. Words from the Festival Origins of Blue Note A
2019
keywords:   accessible   alcohol   band   blues   booths   comedy   disability   food   jazz   musician   on   running   showers   singer   soul   water

Ian St Arnaud
At 23 years old, Ian St. Arnaud found himself to be an old hand on the festival performer circuit, a University graduate, an accidental overdose survivor and at a loss for what to do with himself next. The previous fall his bandmate, friend, and at times antagonist, was hit by a train, thus dissolvin
keywords:   band   guitarist   musician   singer   solo

About Us
Documents → About Us
You know that feeling you get when your favorite song comes on; the build up to that drop, those rap lyrics that hit the spot. You hear words you can relate to and feel the beat that consumes you, the rock n roll that empowers you, the country song that fills your heart with sweet mem

IleSoniq (Montreal, Quebec, Canada)
IleSoniq is takes place annually in Montreal,Quebec,Canada. This music festival is typically dedicated to electronic, dance and the hip hop music side of things.Produced by evenko, the architect of the Osheaga and HEAVY MONTRÉAL festivals , îleSoniq settles this summer in the heart of Montreal, at Pa
2019  |  2018  |  2017  |  2020
keywords:   DJ   alcohol   booths   electronic   food   group   hip   hop   musician   pop   rapper   solo

Punk Rock Bowling (Las Vegas, Nevada, United States)
Punk Rock Bowling is not just a music festival but a bowling, pool party, poker event and more. The festival is all ages but there are 21+ club shows taking place as well. Words from the Festival ABOUT THE ORGANIZERS The Stern brothers have been
2019  |  2018
keywords:   accessible   alcohol   band   booths   disability   food   musician   punk   rock   singer

Dusk (Tucson, Arizona, United States)
Dusk is one day festival outside Tucson, Arizona at the Catalina mountains. Bringing you hip hop,indie and electronic artists along with beautiful art and experiences.TUCSON COMES ALIVE AT DUSK Dusk is an exciting musical experience held in the heart of Tucson at the Historic Rilli
2019  |  2018  |  2017  |  2016
keywords:   DJ   alternative   electronic   hip   hop   musician

ZeusUniverse
ZeusUniverse
Hello, Ive traveled from SoM to join everyone in the love of music, Im not apart of a band or a musician myself, but I do love listening to music
keywords:   classical   country   hip   hop   pop   rock   spiritual

Listen to this soundcloud recording
Soundcloud
So lucky was I to be brought up with musicians like the Beatles... 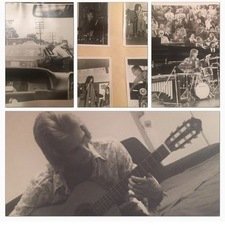 Photo
My father was a musician. A drummer and a singer. He was sure to bring us up with music. Jazz, blues, disco, rock and roll. And I am ever so greatful. We didnt have television until I was six so music is what we had to keep us entertained.