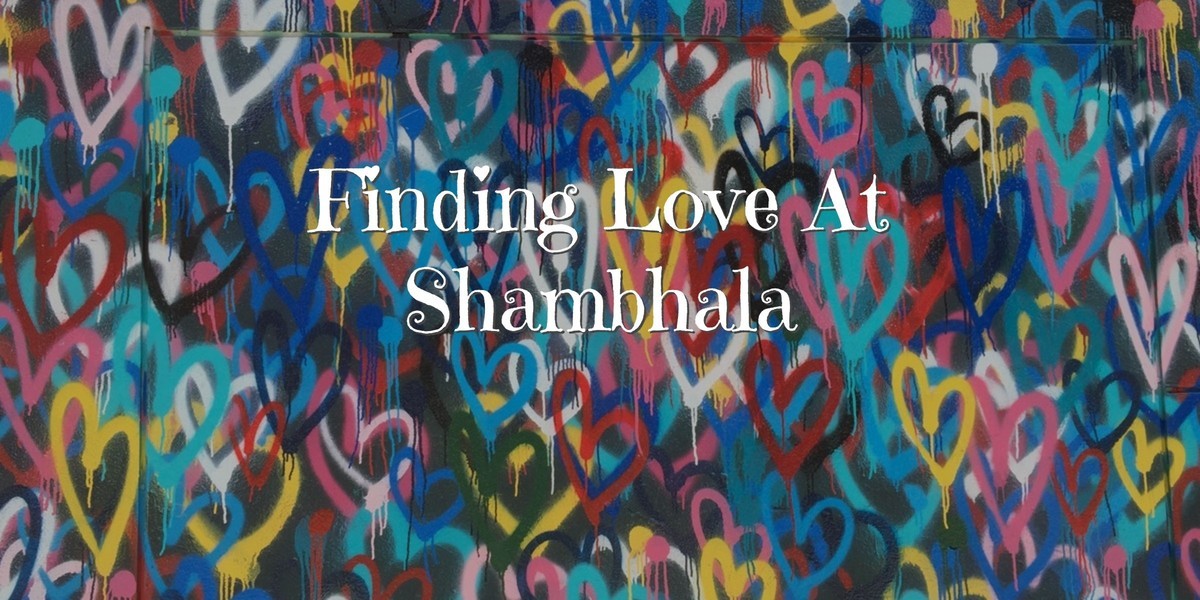 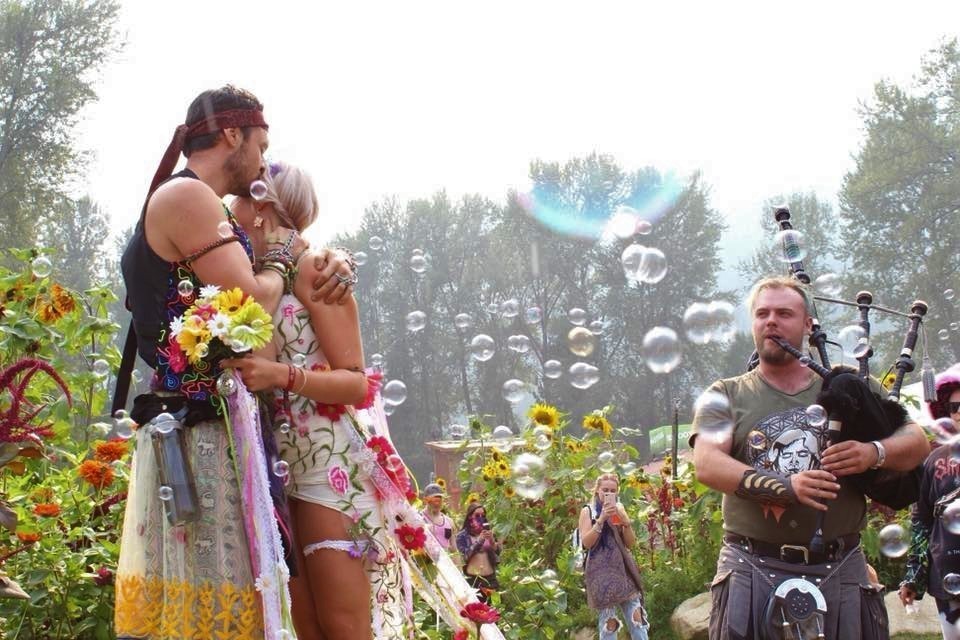 As a single woman attending Shambhala and other festivals, I find myself noticing the lovers and adorable couples holding hands, laughing together, dancing together and keeping each other warm. At this time in my life, I am generally content with being single, but witnessing this connection between others causes me to think I want that with someone. Music and dancing are important to me and wouldn't a festival be a great place to meet someone with similar interests. Although I still have not encountered festival love for myself, this year I have had the opportunity to connect with and share the stories of two couples who did find love amongst the magic of Shambhala. So for those of you ready to give up on your festival soulmate, here are two stories that show us that Shambhala fairytales do exist.

Brent and Keesha Carpenter met at Shambhala 2017. The year the forest fires grew close, and the festival was meant to close early. Many packed up and headed home, but some chose to stick around. For those who did stay, they received an early morning surprise. The fires had shifted, the rain had come, Shambhala was able to remain open. Brent and Keesha were two of the many people who chose to stay. I mean what is a little forest fire close by right? However, if they did not stick around this story would have turned out much differently. Brent was dancing at the Pagoda stage, when Keesha came dancing along, little did he know this woman would quickly become his wife."I felt a wave of cool air come over me as I danced in the Pagoda. I opened my eyes to see the most beautiful girl in the world fanning me. She had put peppermint oil on the fan to make it more refreshing. We fell in love instantly. She asked for my phone number. I told her that we should stay together forever instead."- Brent

Brett was serious when he said this, that day at the sunflower garden he proposed to Keesha with a beautiful quartz ring he had purchased from one of the vendors. Keesha said yes, and from there the love between them only grew stronger. On August 13, 2018, exactly one year later at 3:33 pm, the time and place which he had proposed, the two were married. "Thank you Keesha Carpenter for being so perfect for me. I always knew that you were out there and Im so happy that I waited for you!" -Brett 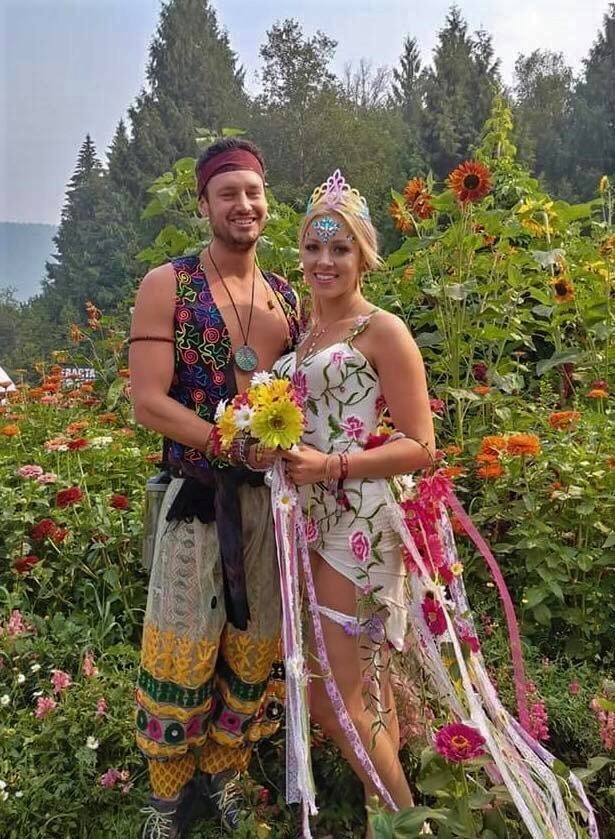 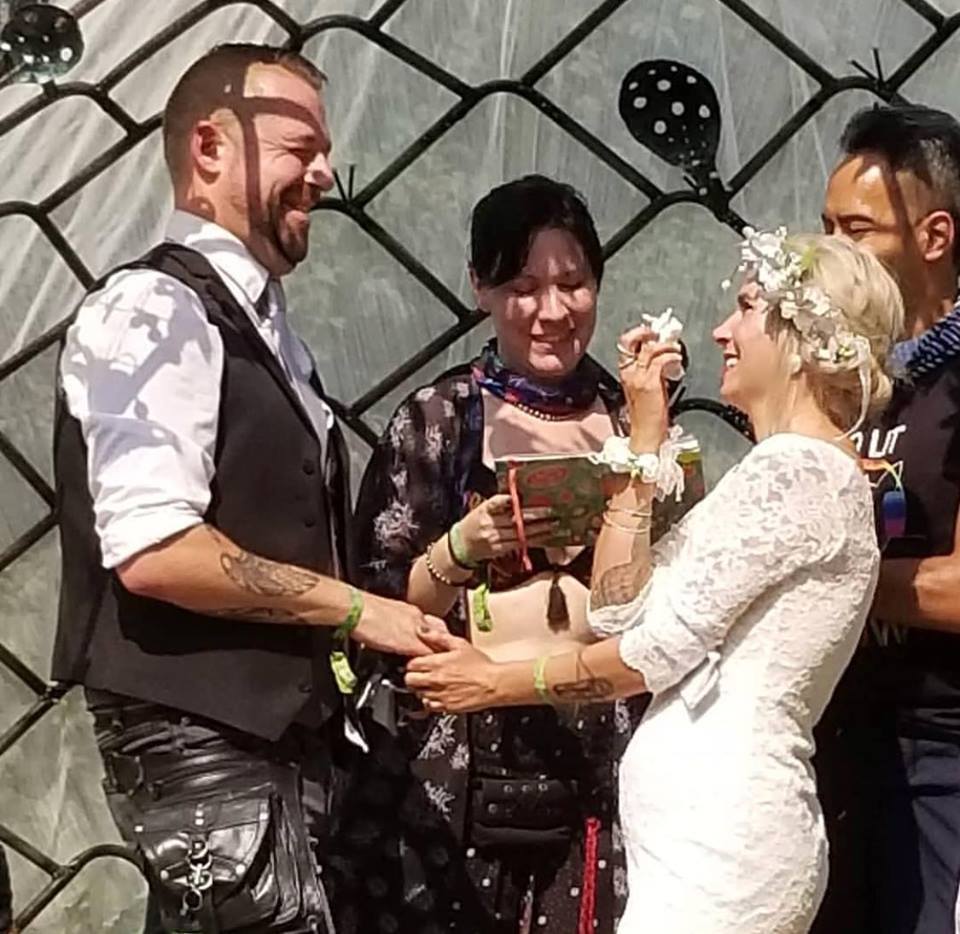 Melissa Rose and Thomas Kerstrong had known each other since high school. While losing touch, they both grew up, got married and started families. When both couples ended up separating, they began to run into each other each year at Shambhala. Eventually, life got in the way, and Melissa was unable to attend for a few years. Finally making her way back to the farm in 2017 she contacted Thomas to see if he would be there. He was unable to attend that year but wanted to hear all about it when she made her way back. Melissa, a flight attendant, was living in Winnipeg at the time. Thomas, who loves to DJ was living in Calgary. Shortly after the festival, Melissa had a flight delayed and was held over in Calgary for the evening. She contacted Thomas and asked if he was up for having a drink. They had not seen each other or had an in-depth conversation since high school, but very quickly the two caught up and reconnected. The pair stayed in touch, became best friends and became a support system for each other. Growing and bonding strongly, they officially had their first date in December 2017. "From that day on he asked me every day if I would marry him, I asked him the same." - Melissa

In June 2018 they decide the perfect place for them to get married would be at this years Shambhala. There they were married at the chapel, witnessed by friends and the Shambhala farmily. "Our wedding was the most beautiful and exciting day of our lives. It was absolutely perfect. We had the best honeymoon getting to know each other in an even more intimate level, and where better to do that than at Shambhala? We are even more in love than I thought was possible. We will remember our wedding and honeymoon so vividly for the rest of our life together. Also, our anniversary will always be during Shambhala." -Melissa 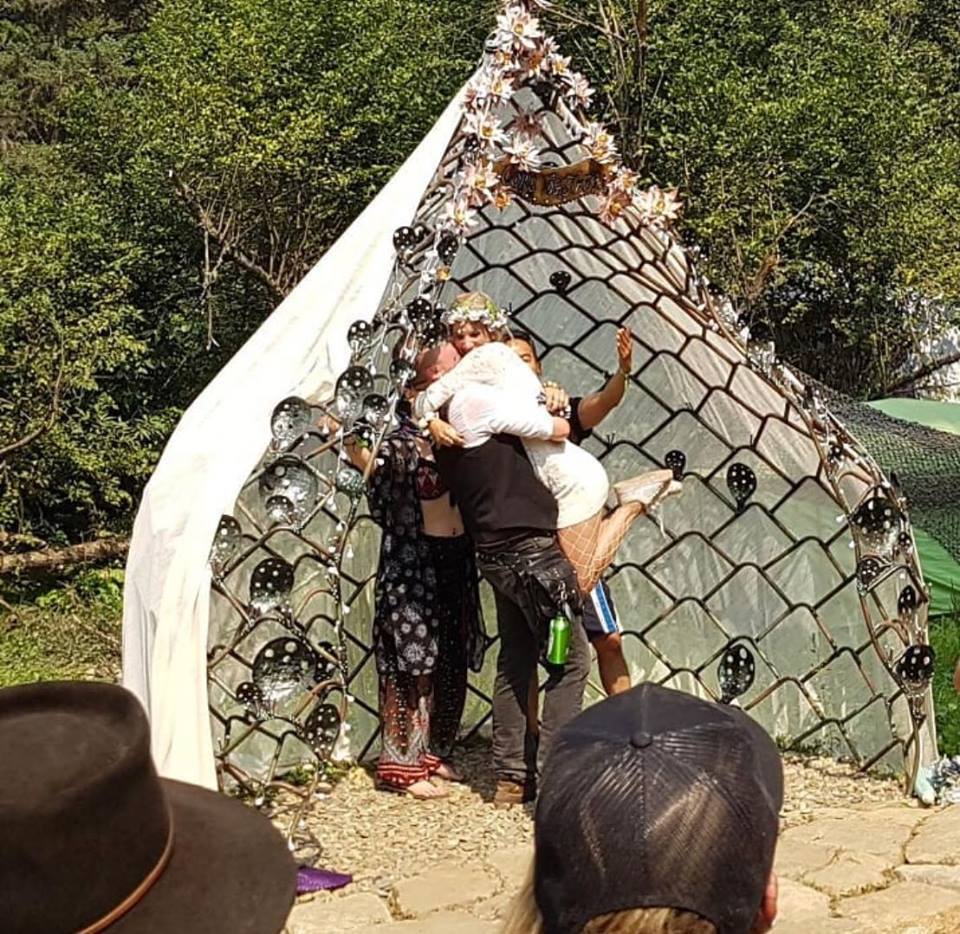 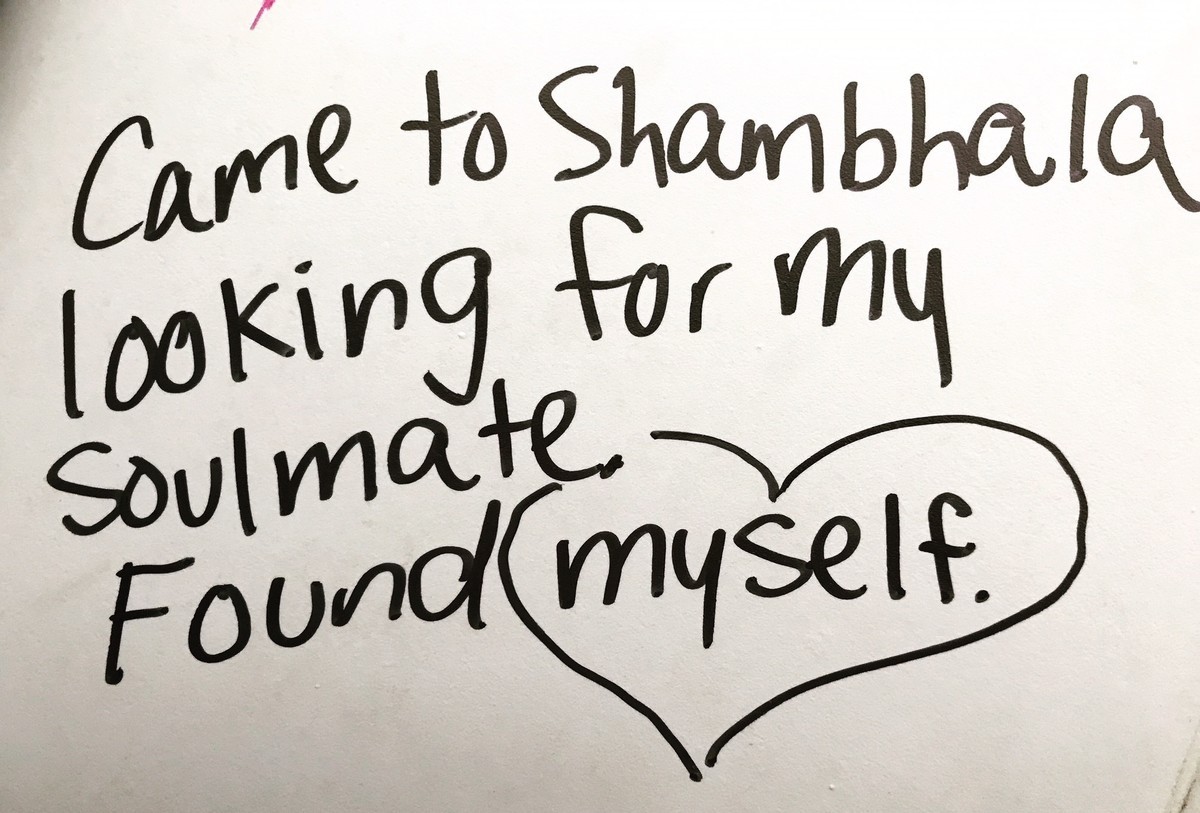 As I mentioned above, I often go to festivals witnessing the love and wondering if this may be the time I meet my soulmate, and I sometimes leave a little disappointed when i do not. I think that may be true for many single folks attending these events. As each day passed at the farm, I thought to myself "I still haven't met someone, where is he? ", romanticly that is. Sunday morning I woke up and headed down for the last few sets of the weekend, I was trying to ignore the incoming phone calls and emails that were beginning to stream in. It was Monday morning, and I was not ready to go back to reality just yet. "I am not ready to go yet! where is my soulmate?" I thought. I went to the porter potty. The porter potties at Shambhala are full of writing on the wall, for those of you who have not attended you will find stories, humor, insight, poetry, you name it. If I didn't have a fear of breathing inside of them, I hold my breath until I possibly cannot any longer. I would probably hang out there longer and read it all; those words can really make you think. On this trip to the loo, something caught my attention. You see each Shambhala or festival for that matter has taught me something more about myself. The things I want to achieve, the things I am grateful for ( yes flushable toilets are one of them) and the things I would like to change. Each experience surrounded by music, dancing, freedom and love has taught me something new, has been unique and it has brought me closer to myself. Each festival I have connected with the people I believe I am meant to and have created deeper connections with my friends from beforehand. That day I realized I didn't need love from a particular human being, I was surrounded by love all weekend, from strangers, from friends, from music. And how I came to realize this all was from a quote, written across the wall of a porter potty that read

I came to Shambhala looking for my soulmate; instead I found myself

Exactly what I needed to see that day, exactly the thoughts I was intended to leave with.

Love comes when it is meant to be. I may not have found "the one" this time, but as we just learned from Brent and Keesha, Thomas and Melissa and the many others who have bonded at Shambhala, you never know when love and magic are coming your way. Congratulations to the newlyweds may your love and happiness stay strong. Thank you for sharing your story and your love with us all. 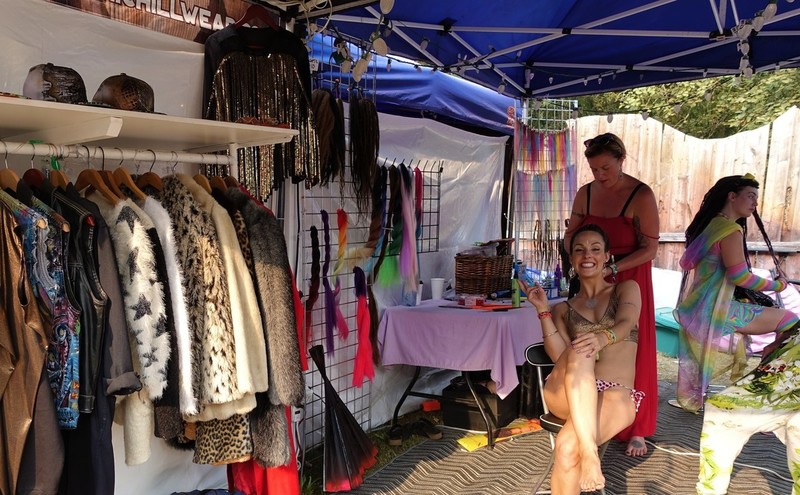 https://www.mixinmeup.com/articles/festivals/shambhala%27s%20most%20exciting%20looks%20of%202018/316/
Check out our article on Shambhala's most creative looks here